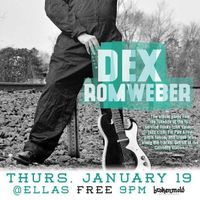 For nearly 30 years, the name Dex Romweber has been the password to a cool club. It lets the doorman size you up through the slit in the green door that leads to a world where rock and roll is still real… and real, real gone. Dex's progeny, impacted by his wild and wildly influential work in Flat Duo Jets, his Duo and solo, includes the White Stripes, the Black Keys, the Kills, Man or Astroman? and dozens of other bands that have stripped down, turned up, and cut loose.

Songs don’t just come out of Dex, they seem to erupt; there is an unearthly urgency in the singer and the song. There’s no tamping it down, Dex lays it out there every time. But sometimes – in all that mind-blowing sound and energy – the soul often gets overlooked, and Dex is, above all else, a deeply soulful performer.

Carrboro, with its cover shot of the railroad tracks that run through his hometown, where on a grey day or a dark night you'd find a young Dex immersing himself in the music of his idols, is his fourth record for Bloodshot (and his first for us a solo artist). Through 13 originals and far-ranging covers, Dex reaches into his steamer trunk of influences and inspirations, and fabricates an enthralling sonic quilt. As Dex describes his approach, “It doesn’t matter to me what genre—if I like a song I might record it.” It’s all different, but all of one piece.

On Carrboro, Dex assumes several musical mantles (and uncharacteristically plays all or many of the instruments). There’s the sparse and jumpy hillbilly liveliness of “Knock Knock (Who’s That Knockin’ On My Coffin Lid Door?)” with help from Rick Miller of Southern Culture On The Skids; “Lonesome Train,” originally recorded by Cecilia Batten in nearby Chapel Hill in ’57; and a take on the T. Bone Burnett-penned “I Don’t Know,” sung by The Dude and Ryan Bingham for the film Crazy Heart (says Dex: “the lyrics seem to be so much about my own life… damn I just had to record it”). With the fuller sound of the New Romans, a 10-piece Chapel Hill collective, “Nightide” is a Tarantino grind on the surf-deck of the USS Enterprise, while Mahalia Jackson’s “Trouble of the World” throbs with a thrilling apocalyptic gloom.

Dex’s last-call crooner persona kicks off the album with a surprising contemporary cover, that of English singer-songwriter Findlay Brown’s “I Had A Dream” (“It affected me deeply personally when I first heard it,” Dex explains). He embraces “Smile,” a Charlie Chaplin tune (yeah, you read that right) and the Jerry Lee Lewis obscurity “Tomorrow’s Taking Baby Away” with Waits-ian levels of resignation and weariness. And no Dex Romweber record is complete without some instrumental wizardry. There’s the tiki surf of “Midnight at Vic’s” and the sunset dreamscape of “Out of the Way.” He even turns “My Funny Valentine,” the Rodgers and Hart Broadway chestnut from the 1930s into the soundtrack to a ghostly roller rink murder caper.

In the end, the album plays like the jukebox at the full service honky-tonk saloon, jazz club, Tin Pan Alley pitch house, and blues joint along the tracks. Get off at the Carrboro station.